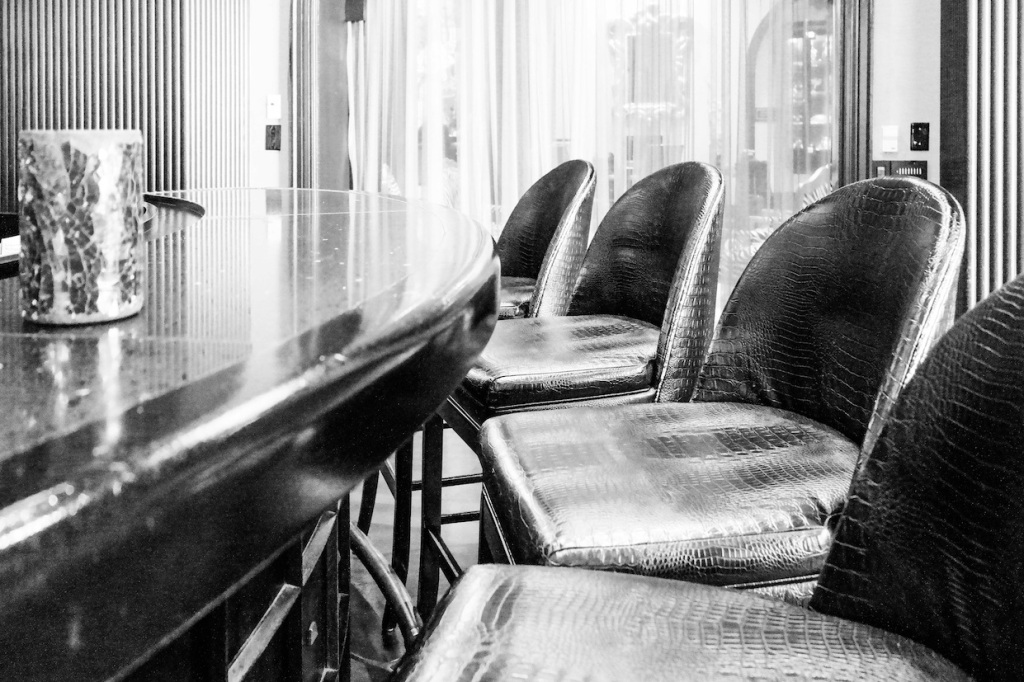 The bar will be opening shortly. Credit: Wikimedia Commons.

The Alderman is coming—this summer

Launching in summer 2015: Alderman Lushington is a new online magazine about drink, drinking and drinkers. Read more about the Alderman here. Follow the Alderman on Twitter for updates: @aldermanlush. Sign up for e-mail updates using the menu at the side (click on the menu tab to access this). Share this piece by word of mouth or through social media.

In the meantime, here’s something about what we’d like to be drinking in spring, just as it’s coming to an end.

Spring is like a Champagne cocktail: a bit of fizz and a sugar cube soaked in bitters. If you believe Chaucer, then April is full of sweet rain that brings forth glad flowers; if you follow T S Eliot, it’s the cruellest month, where the rain breeds forth lilacs out of the dead land in a sad old affair. The British love spring because the weather can change half a dozen times in a day, alternating between intimations of summer and reminders of winter; it feeds the weather obsession. It’d be ludicrous to match food to spring weather, even more ludicrous than the annual barbecue weather pieces, as if we lived in Sicily or Southern California. Which spring?

The best thing to do is choose which plausible if fake idea of spring you fancy, and then match some drinks to it. Think of it as a mood rather than a meteorological phenomenon. This year we’ve decided that it’s fresh and cheerful. Note: Alderman Lushington recently appointed an editor for the US/Americas and will have more of an international focus in future, but the suggestions below are slanted towards the UK drinkership.

Spring beats the shit out of the other seasons, it’s the only one that has an element of hope about it. All the others are entrenched with a kind of bitter inevitability of doom, you know that none of them are going to end well, and in the case of winter you know that the whole season is going to be long hard struggle though the worst of whatever God decides to throw at us. Spring, it just improves with each passing day and it is only now that anything seems possible This is what drinks need to match, they need to be light in both colour and taste. A hint of something floral and perhaps some effervescence are what is called for. Hope in a glass.

If there is one plant that sums up bright spring mornings, indeed if there is one scent, it is elderflower; its tender, feminine perfume can fill a room and remind us that the simplest things can be the most rewarding. The Elderflower Collins, if made correctly, can capture this.

Top up with soda water. Extras—wedge of lemon, ice.

Put the gin, elderflower, lemon juice, sugar syrup and ice into a Boston shaker and shake for 30 seconds. Strain into a high ball glass over ice and top up with soda water.

Spring to me means the coming of the light, days are longer and brighter and all of nature seems bursting with life, spring is when nature is just putting its clothes on. It’s that lightness and the soft floral scent of spring that I think is captured in a Helles beer. Incidentally, Hell is the German adjective for light and Helles is a noun that means “the light one”. Of all the Helles beer I have tried, I have to say that the one made by Augustiner is head and shoulders above anything else. Originally only available in the spring, it is not surprising that it can now be found all year round in the better off licences and beer merchants across our great planet. The colour of very clear straw. The presence of the noble hops gives it a light herbal aroma, some have described it as cut grass. The taste is crisp but with floral honey; it’s not Waggledance honey, this is far more subtle. It’s really the sweetness of the malt coming through, but there is also a bit of sulphur in there. If that has you staring at your screen saying, “you fucking what, that sounds foul”, then you have to try it, it just works. Ending with enough dryness to bring you back for the next sip, it’s perfect!

If I had to drink wine from only one region for the whole of spring, I’d make it the Loire valley, in France. While you’d do well with a Sauvignon Blanc from, say, Pouilly Fumé or Sancerre in the Loire, now or at any time, for white I’m going to keep it to (dry) Chenin Blanc. At its best, it has the perfect balance of fruit, acidity and body for spring. The fruit isn’t ripe, it’s ripening; the acid isn’t rasping, it’s fresh; it isn’t winter thin or summer fat, it’s somewhere in between. There’s a hint, an intimation, a suggestion of sweetness. Not all of them are like that, there are more medium-ish styles, while it’s also used to make superb pudding wine, but these are the spring wines we want. (South African Chenin is more likely to have a ripe-peach unctuousness from the warmer, more ripening climate.)

Vouvray is the place to start, it’s the largest (and most frustrating) Chenin-growing area. There’s some pot luck as to style and quality and it’s best to pick one you know or ask for the advice of a trusted merchant. Sec means dry and is a good indicator of the style we’re after, while demi-sec indicates medium dry wine and moelleux means sweet. There are many Loire Chenin-growing areas outside Vouvray, including some that blend Chenin with Sauvignon Blanc and Chardonnay (e.g. Saumur), but the most interesting AOC is Savennières. The wines can be fuller and more complex, benefitting from aging, and are for serious drinking. They tend to have a satisfyingly minerally backbone. It’s not cheap, but for wine of its quality and character, it can represent good value, and it may well be the finest expression of pure Chenin Blanc.

The sparkling wine is generally based on Chenin and it’s often punchy with a nice fruitiness; livelier than Prosecco and more exotic tasting than Champagne. The northerly climate and relatively high acidity of the wines (similar to Champagne) suits fizz making. Crémant de Loire is the most obvious wine, but I also have a soft spot for sparkling Saumur, partly because The Man Who Was Thursday‘s hero drinks a bottle to nerve him to challenge someone to a duel that he expects to lose. Saumur is the largest producer, and quality can be mixed, while the regulations are more relaxed than for the Crémant. A good deal of sparkling wine is also made in Vouvray itself, and indeed elsewhere in the Loire. The wines are made using the méthode champenoise, so they have the same elegant, natural fizz as Champagne.

Loire reds are much less celebrated, and no one would accuse them of being the great wines of the world, but they have a certain something. For the most part they’re fresh, sprightly, juicy and easy-going, though some more substantial wines are made. Many are made using Cabernet Franc, Cabernet Sauvignon’s lesser-known cousin, though some are made using Pinot Noir (the red Burgundy grape) and Gamay (the main Beaujolais grape). They tend to be made in a light, rasping-cherryish style, and they can make a good substitute for Beaujolais. Even the more substantial wines often retain some of the accent on fresh and snappish flavours. This style of wine-making is a little out of fashion—big, dark-fruit reds are the thing—and it’s good to have an alternative for the right occasion. Some really good rosé wines are also made, but I’ll wait till summer for those.

My local wine merchant, the ever-excellent Corks of Bristol, has a full house, a really good selection, with a couple of fine Vouvrays and a classy sparkling Vouvray (all made by Vigneau-Chevreau, a top producer), as well as a very fine mature Savennières (Clos Du Papillon 2005) and a rare and sophisticated Chenin from the red-dominated Chinon area (Couly-Dutheil, Les Chanteaux 2012). They also have three Loire reds, including a Cabernet Franc (Amirault, La Coudraye 2013, from Bourgueil), a Gamay (Marionnet, Domaine De La Charmoise 2013, from Touraine) and a Pinot Noir (Balland, Sancerre Rouge 2010, from Sancerre). The Cabernet is a relatively substantial wine and can be kept, but it’s still fresh and approachable. Corks also stocks a Sancerre rosè. All these wines retail for around £15 at time of publication, except the Savennières, which is a little under £30, and the Gamay, which is just over £10. All the wines are listed here and the fizz is here.

The Wine Society (UK, members only) has a nice range of Loire wines, while its own-label sparkling Saumur is made by my favourite local producer, Gratien et Meyer, and is excellent value at £9.50. Gratien et Meyer’s standard sparkling Saumur is available from Majestic at £13.50. The Society’s Crémant de Loire is also made by G & M; there’s a nice piece about how it is blended here.

The Wine Society also used to sell the perfectly named Spring Vouvray (Vincent Carême), a simple but excellent value wine, but it looks like Asda now sells it. (For the most part, and without being prissy about it, I don’t buy much wine from supermarkets.)

The Vouvray I grew up with, one that’s likeable and widely enjoyed, is Marc Brédif. It’s  off-dry, but so crisp you hardly notice; there’s much fruit. None of my usual suppliers stock it, but looking online there are a few options. I like the look of Fareham Wine Cellar, though I can’t vouch for them. (I see they also stock Masi wines from Italy and Argentina—superb and not all that easy to find.)

A good value Savennières that I used to buy regularly from Corks and the Wine Society, but which neither stocks for the moment, is La Jalousie (Domaine du Closel). Waitrose appears to sell it now. (Did I mention that—without being prissy—I don’t buy much wine from supermarkets?)

Berry Brothers & Rudd (London, Basingstoke and online) has a good selection and stocks wines from Eric Morgat, one of the more unusual Savennières producers, making fuller (but still dry) wines.

Fresh and effervescent—it’s spring, etc. This can be an aperitif, a palate cleanser between courses, a digestif, or whatever you like. In its basic form, it’s very simple, made up of vodka or grappa, lemon sorbet and Prosecco, but there are many, many variations. Experiment all you like, you could even follow Andy and swap lemon for elderflower. You could replace the vodka with Campari or Aperol and use orange or grapefruit sorbet. Whatever seems good, so long as the flavours combine with decent harmony.

Every time I mix this the proportions are different, according to mood, company, occasion, type of vodka/grappa (e.g. plain, citrus, strong…), character of sorbet, robustness or otherwise of Prosecco, etc. A bit of personal judgement and practice do the trick. Here are some basic recipes to start with, if you want some direction: BBC and Italian Notebook. Here’s one with limoncello—and a video (with sound, be warned) showing you how to mix it.