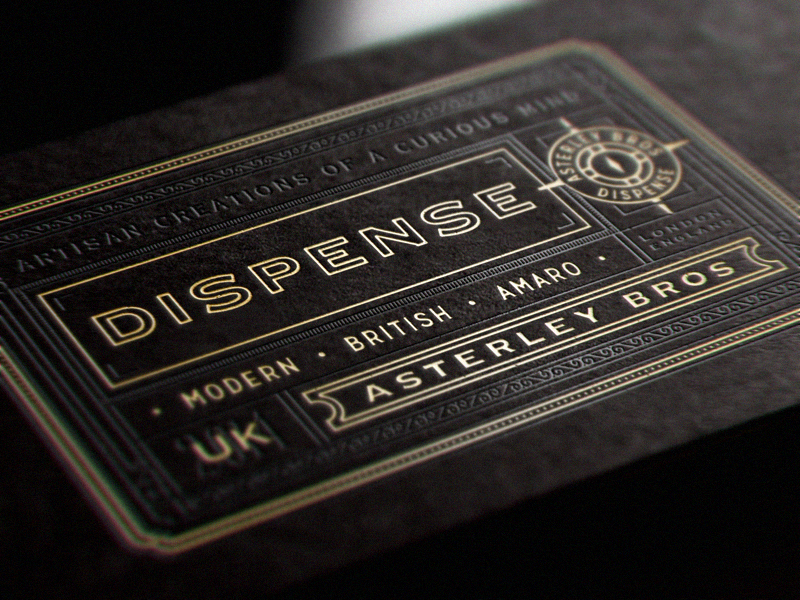 Who are Asterley Bros, what do they do, are they really brothers, what is amaro, how do you make it, and why/how would you drink it? Alderman editor at large Andy Hamilton asked the questions and here are the answers.

You are in the process of creating a UK amaro. It’s not a drink that we know that well here, can you tell us something about it?

An amaro (plural: amari) is a classic Italian liqueur, a digestivo to take after a meal. They are usually bitter (amaro means “bitter” in Italian) and scented with herbs and spices from the region in which they’re produced. To a degree each regional recipe is a reflection of the terroir and each village in Italy will have its own take. In the north, they would use mountain herbs and flowers, with lots of eucalyptus and pine notes, whereas our family’s recipe from Sicily in the south uses lots of local citrus and spices brought to the region by the Arab settlers many centuries ago. Traditionally amaro is drunk after meals to help digestion, but we wanted to make something that could work well as an aperitivo as well. We wanted something light and fragrant enough to work with ice or tonic, but with enough weight and body to stand alone as a digestivo. We wanted to move away from the deep, rooty, earthy flavours of many classic amari, to reduce the sugar content and move away from the viscosity to create something new. A modern British amaro.

We’ve had a food revolution in the UK, is it now time for a booze one? Is that why you’re releasing your amaro now, or are you ahead of your time?

I think we are undergoing a booze revolution already in the UK. As amaro producers we’re following the trails blazed by the UK’s craft beer producers and the huge boom in micro-distilling and gin production. London producers are now making whisky and rum, so why not amaro? Our bars make their own bespoke spirits with rotavaps (rotary evaporators) each day and the top bar in the world, The Artesian, is right here in London. In addition, British wine is now beginning to be recognised on the global stage as some of the world’s finest sparkling wine, so things really are moving on rapidly in the UK. As for us, it’s not that we’re ahead of our time, but the British palate is rapidly becoming more accepting of bitter flavours. The growth in popularity of Campari and Aperol, the rise of the Negroni and the resurgence of cocktail bitters have all helped drive that taste profile. In addition, there is a change in consumers and how they want to live. People are searching for authentic, individual products made by real people and not conglomerates. At the same time there are people like us, who want to craft and create exciting artisan products and luckily the barriers to entry are lower now than they have ever been. Having spent a few years talking about doing this, about creating a modern British amaro, the timing just felt right for us.

We’d start tasting and trialling first thing in the morning and then forget what we were doing, knock things over and head to the pub! We are also heavily reliant on good quality sourdough bread to balance the booze and reset the palate. Lots and lots of bread, that’s the key!

Can you tell us a bit about the process of designing a drink; why are you beta testing, is that just a way to garner a following pre-launch?

When we design a new recipe we go to our collection of macerations and blend elements together to find combinations that work. We have a core range of around 200 separate elements and we are always adding to those when we see something interesting. We’ll probably go through 20 iterations and blends before trialling recipes in small quantities. Once we figure out the quantities and timings for complete blends, we scale up the production size and trial again until we’re happy. The beta testing is the next step and we took inspiration from the software world for that. We want other people’s opinions to help us shape the blend; knowing that amaro in the UK is quite a niche product, we wanted to see what people would make of it. Is it too sweet? Could we get away with making it more bitter? The more opinions we get, the better our understanding of our audience, and as British amaro is a new concept, we’ve found these opinions can vary quite dramatically. It’s then up to us to find a recipe that we love, that is also enjoyed by others.

You must have tasted a few drinks to get to the point you are at, was that fun?

Our work in that regard is never done (thankfully!). There is so much incredible stuff being made by passionate individuals across the globe that we just love that side of the job. Research, you say? That makes it sound very official… Obviously we take our work very seriously here at Asterley Brothers. Any beverages we consume and the resulting tomfoolery and hangovers are strictly in the name of R&D.

It could be easy to be drunk all the time, how do you balance a love of booze with sobriety?

It’s definitely a fine line! There are a lot of aspects to the job that need to done in a very focused manner. Accounts, marketing, design, ordering, etc, so we try and stay on top of that in the daytime. To be honest, if there’s any tasting to be done, it’s at the end of the day. We learned that lesson pretty early after a few non-productive days. We’d start tasting and trialling first thing in the morning and then forget what we were doing, knock things over and head to the pub! We are also heavily reliant on good quality sourdough bread to balance the booze and reset the palate. Lots and lots of bread, that’s the key!

You are “Asterley Bros”, are you really brothers, and if so, do you not bicker and give each other dead arms?

We are brothers. Rob’s the oldest, Jim’s the youngest. Dead arms are a thing of the past, for sure, but we always spent a lot of time together growing up and always had similar interests (booze being one of them!). We have both spent most of our formative years working in the industry, behind bars and in restaurants, so this was quite a natural progression really. Plus, we have quite different characters and personalities, which helps to bring different strengths to the business.

Tell us about the foraged element, are there flavours out there that can amaze the taste buds?

There are all sorts of ingredients to be foraged in the capital, especially around the wooded areas in South London where we’re based. Some of our favourites are the sweet taste and fragrance of honeysuckle, dandelion for some good, rooty body, and goose-grass tastes surprisingly good! Because of the amount that we would need to produce our amaro, we don’t use foraged ingredients in our Dispense Amaro. However, we are intending to do a series of nano-batches for limited release and we shall be using foraged ingredients in some of those in the future.

Care to tell us what’s in it?

All the good stuff. We wanted to create a uniquely British amaro, that was based on our Sicilian family recipe (Rob married into a Sicilian family six years ago) but had a real British sensibility. Sicily meets London. We looked more deeply into London’s history of bitter herbal tonics and liqueurs and came across Culpeper’s London Dispensatory, published in the 17th century. We were immediately fascinated by it and began to incorporate elements into our amaro. So, we use British hops as our main bittering agent, along with rosemary, chickweed, hyssop, myrrh and angelica. There is a lot of warmth from the citrus blend of lime, orange and grapefruit and then we add spice with ginger, cardamom, vanilla and liquorice. We make our own signature vermouth using Pinot Noir from one of England’s best producers and then blend and all the elements together. In total there are 24 elements that combine to make Dispense Amaro and we clarify, rack and leave to mature for two months before bottling. All of this is done by hand and using only natural ingredients.

So what of the future, how do you see your amaro being received and are there more drinks out there?

It’s being received pretty well so far, the feedback has been great. We’re now in the final stage of our beta testing and will be getting a final blend out to all shortly for final feedback. As soon as that’s done we shall be launching and the amaro will be on sale (see below for details).

We’re currently working on a London Fernet, which we shall be beta testing next, as well as our own signature vermouth, which we shall be releasing in small quantities. After that we have a long list of other boozy projects, some small and quirky and others more mainstream, so watch this space

Can you give us a cocktail recipe for your Amaro?

We’ll give you two, both simple and effective.

Fill a highball with ice, pour over the ingredients and add a slice of lemon. Stir for 20 seconds and serve.

After hours: Dispense with the Niceties

Squeeze a strip of pink grapefruit zest inside an old-fashioned tumbler and drop the zest in the glass. Add ice, pour over the ingredients and stir for 60 seconds.

Finally, where can our readers get hold of your amaro and will you be supplying any bars?

We’ll be supplying bars, restaurants through distributors, and consumers will be able to find us in independent wine merchants and online. We’ll have full release details on our website www.asterleybros.com shortly.