LUSH: to drink; speaking of a person who is drunk, they say, Alderman Lushington is concerned, or, he has been voting for the Alderman.1

Alderman Lushington is an online magazine about drink, drinkers and drinking. It launched in July 2015. Now you have seen it, it’s time to bookmark the site, follow it on Word Press, Twitter and Facebook, and tell the world.

We hear much about the 1920s; the 1950s; Mad Men; the revival of this or that. People drink in fake speakeasies, as if prohibition had returned. Anything to escape from the banality and platitudes of modern life: the call centres, price comparison websites, social media “storms”, beards, HR departments, meetings, annual appraisals, clean clothes, travel stories, artisan burgers, party political “lines to take today”, reality TV programmes, and diets.

The Alderman takes no cognisance of such things; he never ceased to practise the art of good living, and especially good drinking. He is an advocate of educated gusto—if you want to do the thing well, or even really badly, you need knowledge, a sense of enjoyment and adventure, and a certain artistry.

A man who exposes himself when intoxicated, has not the art of getting drunk […] Such a man will undertake anything; he is without skill in inebriation.2

Andy’s first alcoholic drink, other than the cider his mum fed him as if it were apple juice, was a 200 ml bottle of Martell Cognac that he bought off his mate at school for £3. He was 13 and drank it just to experience getting pissed. It didn’t work; evidently he could hold that much liquor at such a tender age. On the last day of the same year he stole three litres of Blackthorn cider, which had him singing like an X-factor hopeful before he did his famous “Vesuvius erupting” impression, performed in the medium of bile.

Andy still walks the divide between cheap booze to get you pissed and expensive tipples that should be savoured, although these days getting pissed is an occupational hazard rather than an Arthurian quest. He writes for anyone who’ll pay him, which has included the Telegraph, Guardian and Reader’s Digest. He has written three books, one about beer (Brewing Britain), one about making booze from the hedgerow (Booze for Free) and one about self-sufficency (The SelfSufficient-ish Bible), while he has contributed to many more.

Paul’s first experience of private, unsanctioned drinking came when he was ten. His new best friend asked him if he liked a drink and he said “yes”. After drinking red wine and then dry vermouth he passed out, discovering in the morning that vomited black olives look like crushed beetles. The hangover is the only thing he remembers with any conviction.

Having slid quietly and acceptingly into middle age, Paul tries to do better now. He enjoys wine, beer, spirits, cocktails and just about the full run of drink. There’s a drink for most occasions, and an occasion for most drinks.

Paul is a freelance writer and editor, mostly writing features, stories and reviews, and editing academic, educational and commercial copy. 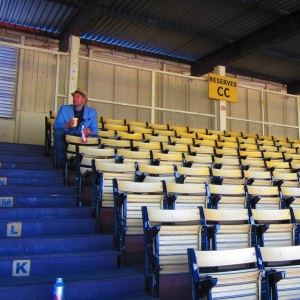 Jeff can’t quite recall his first taste of alcohol.  It’s not so much that his first time was an experience in excess; rather, remembering things, in general, isn’t really his style. Sharing stories, however, is. So legend suggests that young Lewandowski, at some point within his first half-decade on Earth, was in the midst of entertaining a front porch-full of drunk uncles with a lip-synced medley of Kenny Rogers’ greatest hits when he reached out, snatched up an unattended Budweiser pony bottle and chugged down the dregs.

Several decades later and with more than just a little help from his friends, Jeff now finds delight in good wines, decent whiskeys, well-executed cocktails, and beer—fancy or cheap. With advanced age he has gained the wisdom to understand and appreciate the difference between a social drink at a trendy spot and occasions that call for a proper dive bar and short-term goals that by no means involve acting normal. Jeff works at a job most days, but in his heart he is a full-time baseball geek and power-hitting adult league first baseman, who spends his Sunday mornings swinging the lumber as hard as he can, no matter the count, and celebrating post-game in the parking lot with fellow washed-up ballplayers and a few cold ones from the ice chest.

Friends of the Alderman

The contributors are listed here.

Please do. You can use the form below, Twitter and Facebook. You can also follow us via Word Press or e-mail, being notified every time something new is published.

1. James Hardy Vaux 1812 A New and Comprehensive Vocabulary of the Flash Language ↩

Unless otherwise stated, all material on this site is copyright of the authors. Header image credit: Raymond Griffith in 'Hands Up!' (1926).